A calm spring bestows Bosco Plaza; the dark winter of the global pandemic coming to an anticipated and celebrated finale. Local business owner, politician and young Manhattanite, Fanny Fang, wearing the town’s emblematic purple, expresses her faith in the power of youth.

“The resiliency of young people in this state is incredible,” Fang said.

Fang, the daughter of Chinese immigrants, arrived in Manhattan when she was just five years old. Today, she represents a growing electorate: a generation of Kansans who lived through a new wave of Democratic women running for office; a wave characterized by, for example, current Gov. Laura Kelly, Democratic Sen. Nominee Barbara Bollier, and former Manhattan Mayor Usha Reddi. Fang didn’t imagine being a politician when she was in school, but certain unfortunate circumstances required her to embody a change that is present in the current political atmosphere. In her case, it was the racially insensitive comments made by Manhattan County Commissioner, Marvin Rodriguez. Fang, speaking her mind online and at city forums, rose as a candidate, and challenged Rodriguez for his seat.

“I am a lot of the dreams that my family has been able to achieve and a lot of my own dreams that I’ve been able to accomplish,” Fang said. “That’s why I returned after graduating from New York University. I had plenty of opportunities to stay in the big city, and work in the big city, but when I returned home to Manhattan, I saw the change that Manhattan was going through. It’s an exciting time to be here, to see that change and to be part of that change to help direct Manhattan to where it needs to be.”

Not too far from Bosco Plaza is Maggie Billman’s office. Located inside the K-State Student Union, Billman oversees legislation as speaker pro-tempore of the K-State Student Senate. She was raised in Altamont, a small town in the southeastern part of Kansas with a little over 1,000 residents. Billman studies secondary education with a focus on writing, english and theatre. Coming to Manhattan brought her to a new world. Billman said that coming to K-State was one of her first introductions to people with diverse identities and origins different from her own. “Coming to school here was, and I think this is for other rural folks who have this experience, a learning curve in interacting with other folks – with people who have different values and beliefs, and things that matter to them.”

Throughout the winter, Billman ran for student body vice president alongside aspiring student body president and international student, Vedant Kulkarni. Her background and newfound experiences gave her the push to run for office, but among her reasons were also K-State‘s issues with diversity and inclusion. 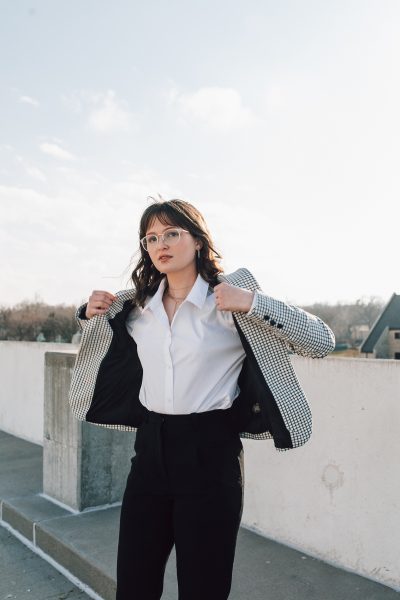 “Even me, as a white woman, some issues don’t directly affect me, they affect people that I deeply care about, and it does affect me because I do care about this university and I care about diverse voices, and my educational experience and the educational experience of my peers,” Billman said. “It just became obvious to me that so many people don’t see K-State as being their home, and that K-State isn’t the place where everyone can feel like they are a member of the family. I saw a need for student leaders that wanted to make progress in that area, and so that’s why I decided to run with Vedant. It’s one of his greatest passions, and I wanted to support him in that.”

On a national level, the number of women in Congress is the highest ever, representing more than a quarter of all national representatives. This number has been increasing steadily over the decades. To Fang, the times when women couldn’t get into politics are over; things are changing both structurally and culturally. 2021 brought with it the nation’s first female vice president, Kamala Harris. In the sunflower state, the late 2010s brought Sharice Davids, the first Democrat to win a congressional district in the state in a decade. The residue of the old cultural roles still affect gender relations in positions of leadership and power.

“The problem that women face in politics is less about the entry now, or being voted in, of course, there are communities where that continues to be a problem, but I think the bigger issue now is that when women do get into politics the respect is still not there,” Fang said. “The male politicians still don’t treat women as equal. I think that’s why many women leave politics after being in politics.”

Billman sees the nature of social gender relations as still important to the conversation about women in positions of leadership.

“In women’s personal lives, a lot of things make it harder for them to be successful in their careers than men, such as the societal pressure to have children, and to be a mother and to be emotionally there for your husband or whoever you choose to have as a life partner, or if you even choose to have children,” Billman said. “I think women are culturally expected to be happy and loving all the time, I think when women are frank there is still this thought that ‘she’s just a bitch for saying what she said.’”

Fang believes there is a wave of female politicians in Kansas due to contemporary political phenomena, represented by events like the Women’s March in 2017 and the rise of the Me Too movement.

“Women are mobilized, women are organized, and women are speaking up,” Fang said.

The type of politician that both Billman and Fang want to be, coming from vastly different backgrounds, is fascinatingly similar. They both want to include more diverse political voices and make Manhattan a welcoming place. Fang stressed working on the out-migration issue that the community and the state have as a whole, while Billman stressed political education as a way to improve student relations. They both look up to politicians like New York Congresswoman Alexandria Ocasio-Cortez, for her ability to unashamedly stand for what she believes in and her ability to relate to her constituents, all of this while not agreeing with all of her politics.

While Fang eventually lost the race for the county commission seat, and Billman will not go on to be student body vice president this year, they both expressed their desire to continue to work for young people.

“I want to be a leader that doesn’t get tired, and that persists on the issues that are important,” Billman said. “For me, and my mom always told me this, if you make a positive impact in one person’s life, you’ve done your job, and so whether or not Vedant and I win, I plan on staying involved, whether that is in SGA or in other respects around campus. I just hope to put myself in small groups where I can have a dialogue with others and learn from others, and make people know that they are welcome here and that their presence does matter, that is really important to me.”

Fang, though now prioritizing her family and her health, looks forward to the future and to what she can continue to do for the Little Apple.

“There is something special about this place,” Fang said. “I’m so glad to be here. With younger people being more involved, and now being in a position that we can see the change that we wanted, I hope that this place will be way more welcoming than it was for 10-year-old Fanny Fang.”

From the Spring Print Issue: Teach the Truth

The Election Through Students’ Eyes