WE ARE MORE CONNECTED TO THE PAST THAN EVER, YET FEEL AND ACT MORE DISCONNECTED.

If you’re one that has an Instant Polaroid collage taped to your wall, or can’t decide which oversized flannel to purchase, you’re not alone. You’re also not the first to admire what are now relics of another time. An early-90’s fascination has recently surfaced among millennials. Chokers, headbands and scrunchies coupled with flannels, laced-up blouses and denim are evidence of a lost style returning anew. Vinyls and vintage cameras sitting on shelves, hanging tapestry and Polaroid pictures are also examples of a growing oldies obsession.

If history repeats itself, trends are no exception as they return only slightly modified and just as popular.

Why is this, though?

Dr. Michael Wesch, a professor of anthropology, suggested his theory on the matter. According to Wesch, nostalgia – a longing or affection for the past – is a manifestation of the tragedy of our times.
For example, Polaroids are real, tangible mementos rather than a photo air-dropped from one phone to another. Wesch points out that their value is more precious because it is a single print.

Each generation can argue about which was better.  Some think the 90s were better because Tupac was alive. Others talk about the simple and fearless fashion of the 90s. Some point out that the rock music was better in the 80s. And then there were the hippies of the 70s (the predecessor of hipsters).

It’s possible that an oldies obsession comes from a longing of the memories of childhood. 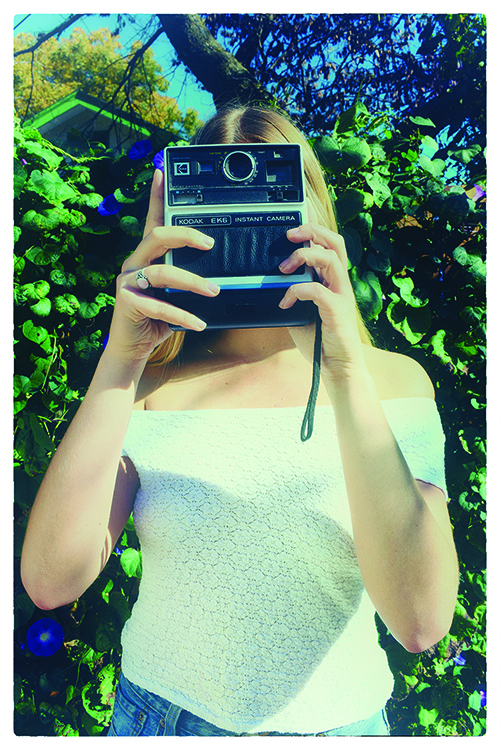 College students are in a transition from young adult to the full responsibility of adulthood. To hold onto that nostalgia of life as a kid would make the 90s a natural target. It enveloped everyday life for many years and can be cause for a craving and desire for simpler times.

Wesch suggests that the reason why history repeats itself, or why trends come back generation after generation, is that we feel disconnected and seek that connection.

“We are more connected to the past than ever, yet feel and act more disconnected,” Wesch said.

Wesch’s theory makes it clear as to why chokers came back and pictures on Polaroid cameras returned as a trend. Students are searching for something familiar.

Whether expressing themselves through a style or competing to see who can relate to the 90’s more, students look for ways to connect. They compete for Instagram likes with retro filters as a tool to teleport photos into the past. In dorms, they compare who has the best vintage decorated room.

Perhaps the most interesting aspect of the theory Wesch proposes is that today’s new technologies will be the nostalgia of our children.

People tend to crave vintage technology and often refurbish it to be useful again, like cameras and vinyl records.

However, each generation tends to look upon the past with rose-tinted glasses. They remember the things they cherished most about past times and forget the not-so-glamorous moments.

Although students are recycling older fashions and trends, they shouldn’t stop living in the moment or focusing on today as soon there will be yet another generation reminiscing about these times.

Whether you’re someone who tries on multiple outfits in the morning or throws on the first outfit that smells semi-fresh, it’s probably safe to say something in your closet will be back in style again in a couple decades – and who knows what it might be.

In With The Old