What do you get when you cross a cereal fanatic and an empty wall? The answer is Spencer Fortney. Since last year, amazed by the wide variety of cereal options, Spencer made it his goal to try every single cereal he could. To track his progress, he has been collecting the remains of his cereal victims and displaying the boxes on his wall one by one. He has a very meticulous process when it comes to purchasing and hanging them.

When it comes to scouting out the “breakfast of champions,” Spencer has nothing but high expectations. He aims for colorful boxes and limited edition cereals, that soon turn into “home décor.” As you walk into his room and gaze at his colorful shrine of boxes, it’s as if they are screaming “taste the rainbow!” “They are first organized into sections by brand, within the brand, sections are then organized by the types of cereal (so all of the different flavors of Chex are together, for example),” Spencer explains.

149 different kinds of cereal and 176 boxes later, Spencer has an array that covers more than an entire wall from floor to ceiling. The cereal story doesn’t stop there… Spencer has even received recognition from the major league of all cereal: Reese’s Puffs. “I uploaded the picture of my cereal wall onto Instagram and tagged the Reese’s Puffs account in the picture. After they replied back, I told them I would dedicate an entire wall to Reese’s Puffs.”  To Spencer’s surprise, he received 4 boxes of cereal, a Reese’s Puffs shirt, socks, cereal bowl and a picnic blanket in the mail, along with a hand-written letter from “Team Reese’s Puffs”. 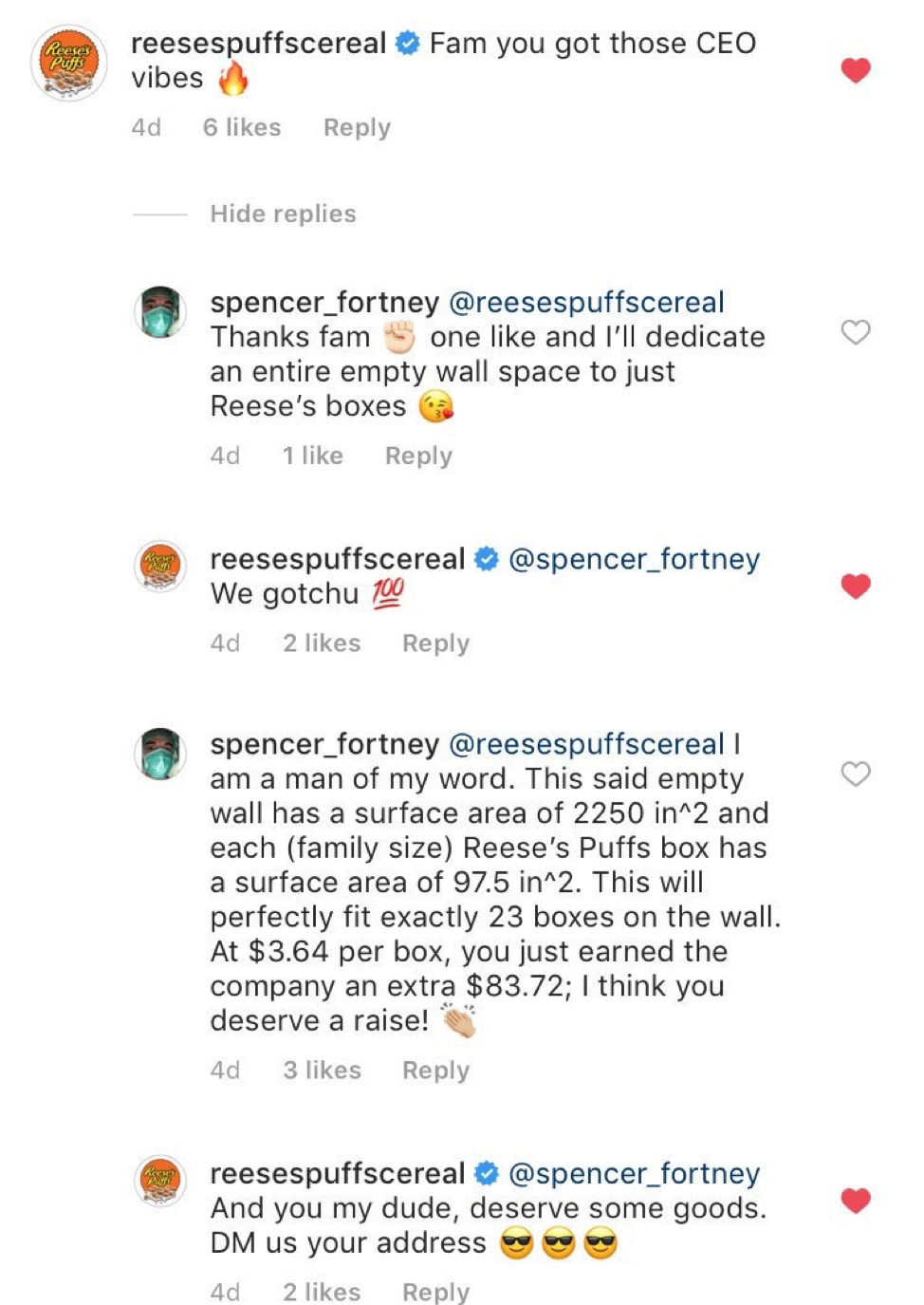 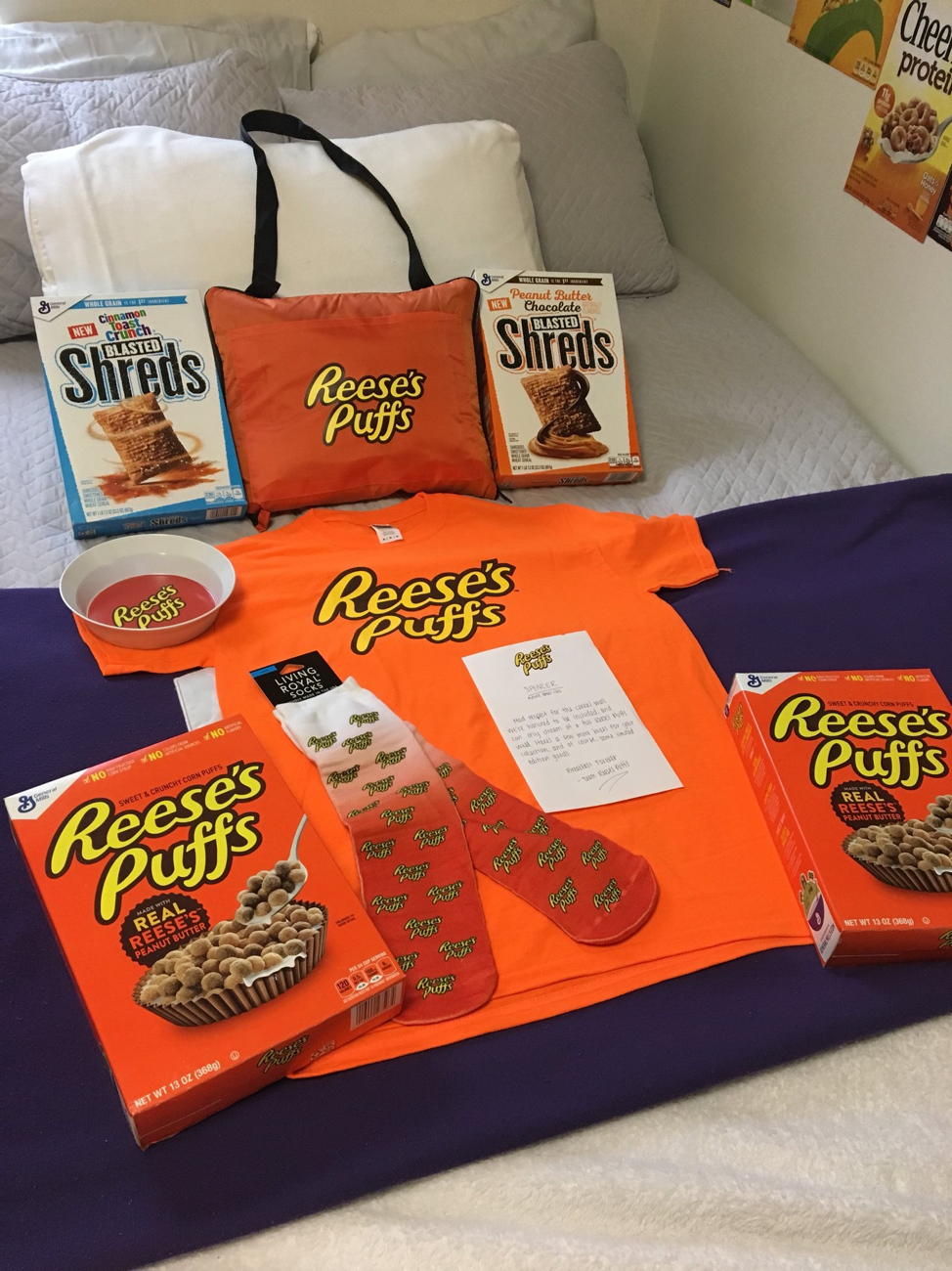 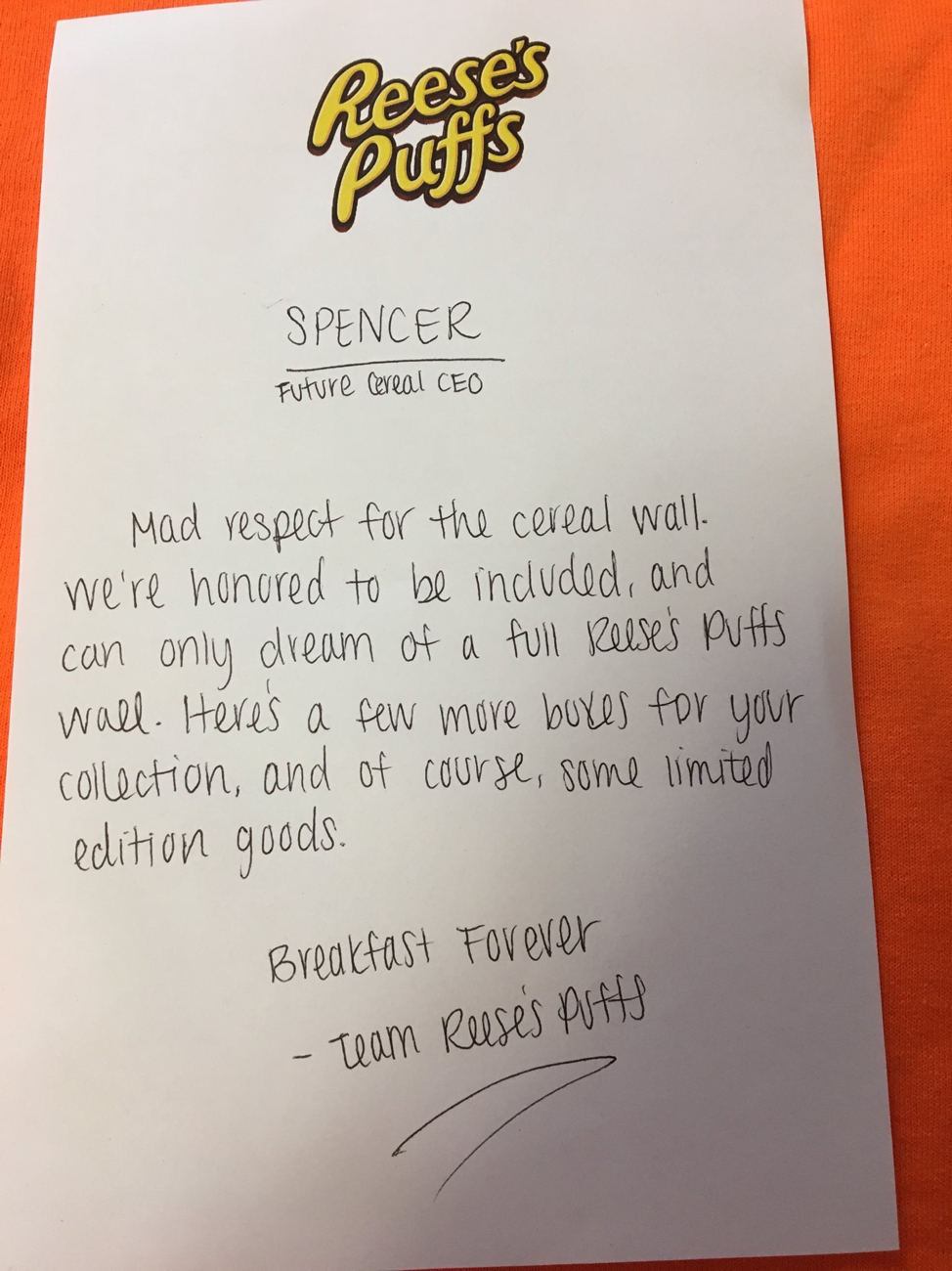 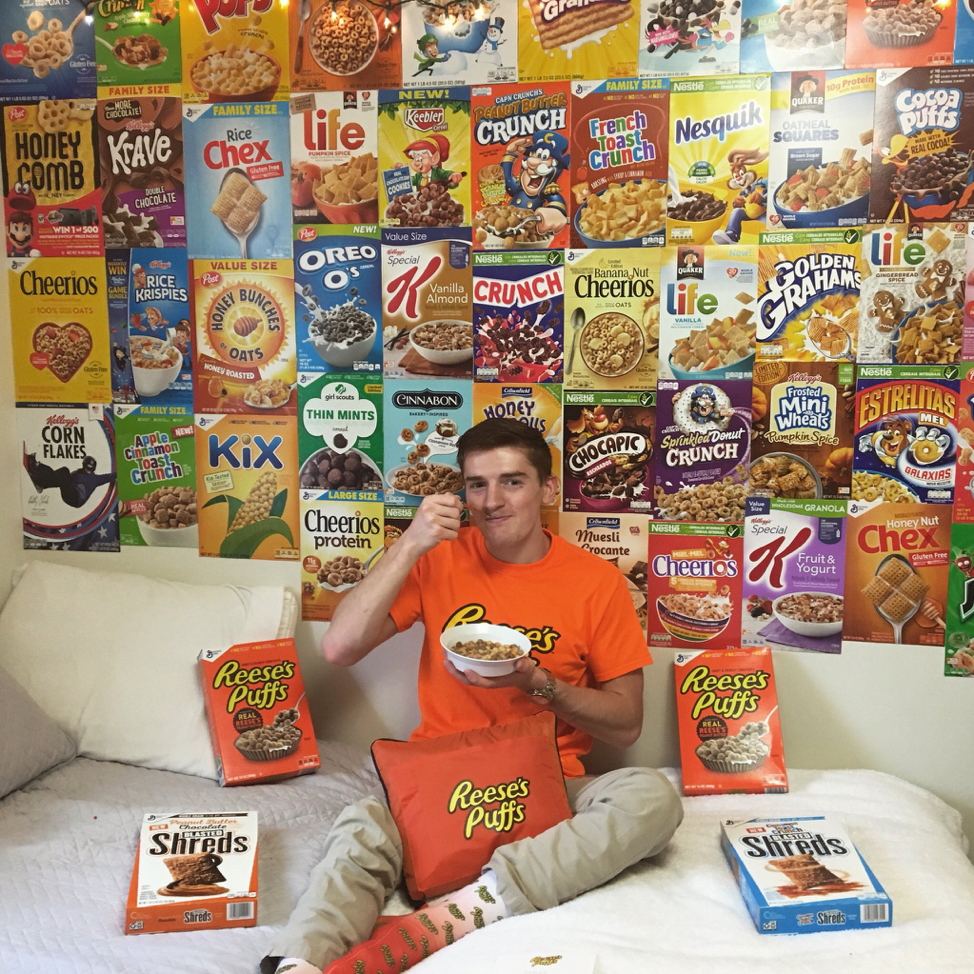 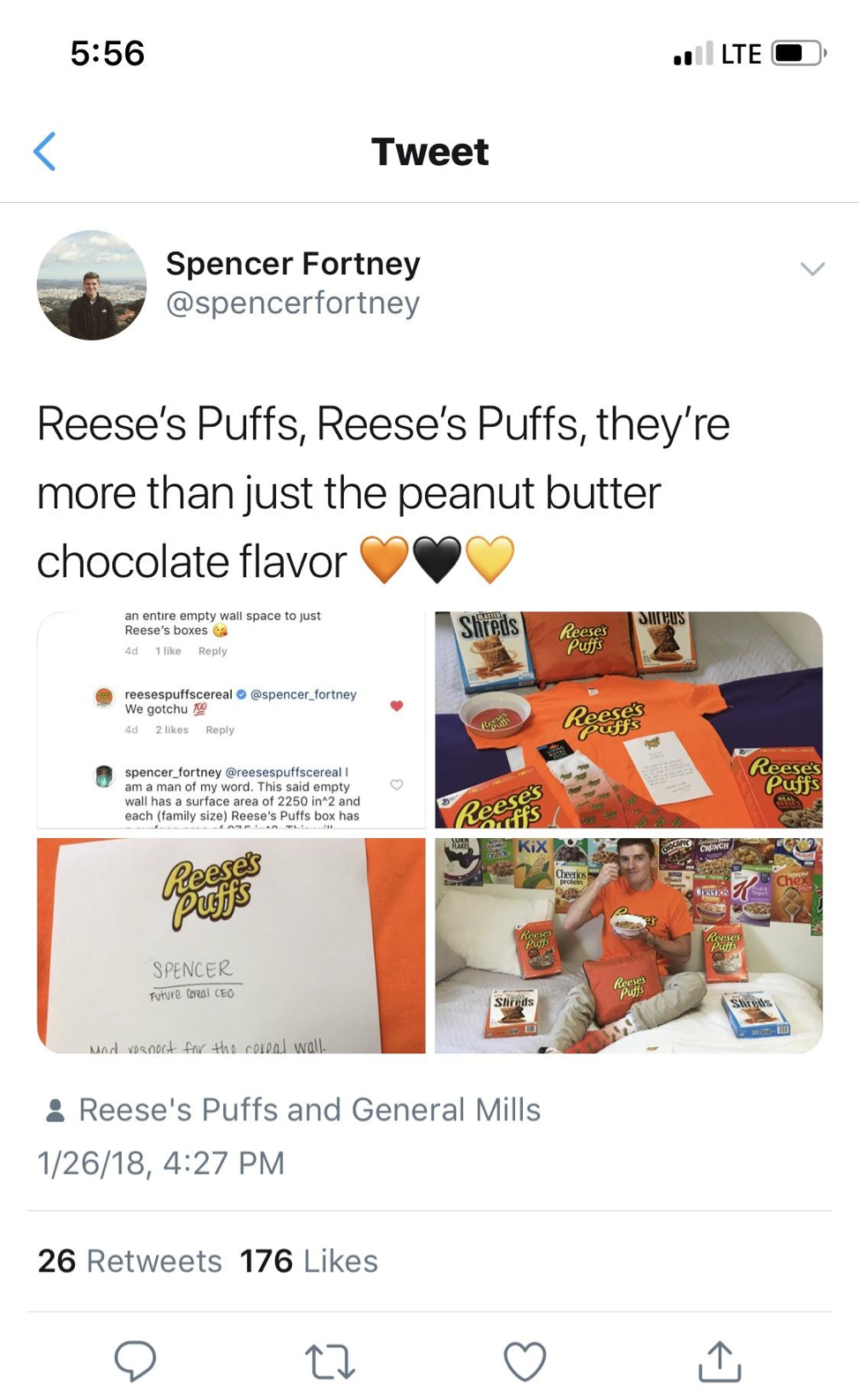 Spencer will continue his growing collection of boxes until “the day that [he] stops finding enjoyment from it.” “Whether that day will ever come is an unknown to me. Oh, and developing diabetes would probably stop me from buying cereal too,” Spencer says.

If you have a box of cereal laying around, I suggest you “hide yo kids and hide yo wife” because Spencer is “coo-coo for Cocoa Puffs,” and will be there to devour your cereal before you can say, “peanut butter chocolate flavoooooor!”

Try it Before You Diet: Here’s Why You Don’t Need to Lose 10lbs During Quarantine