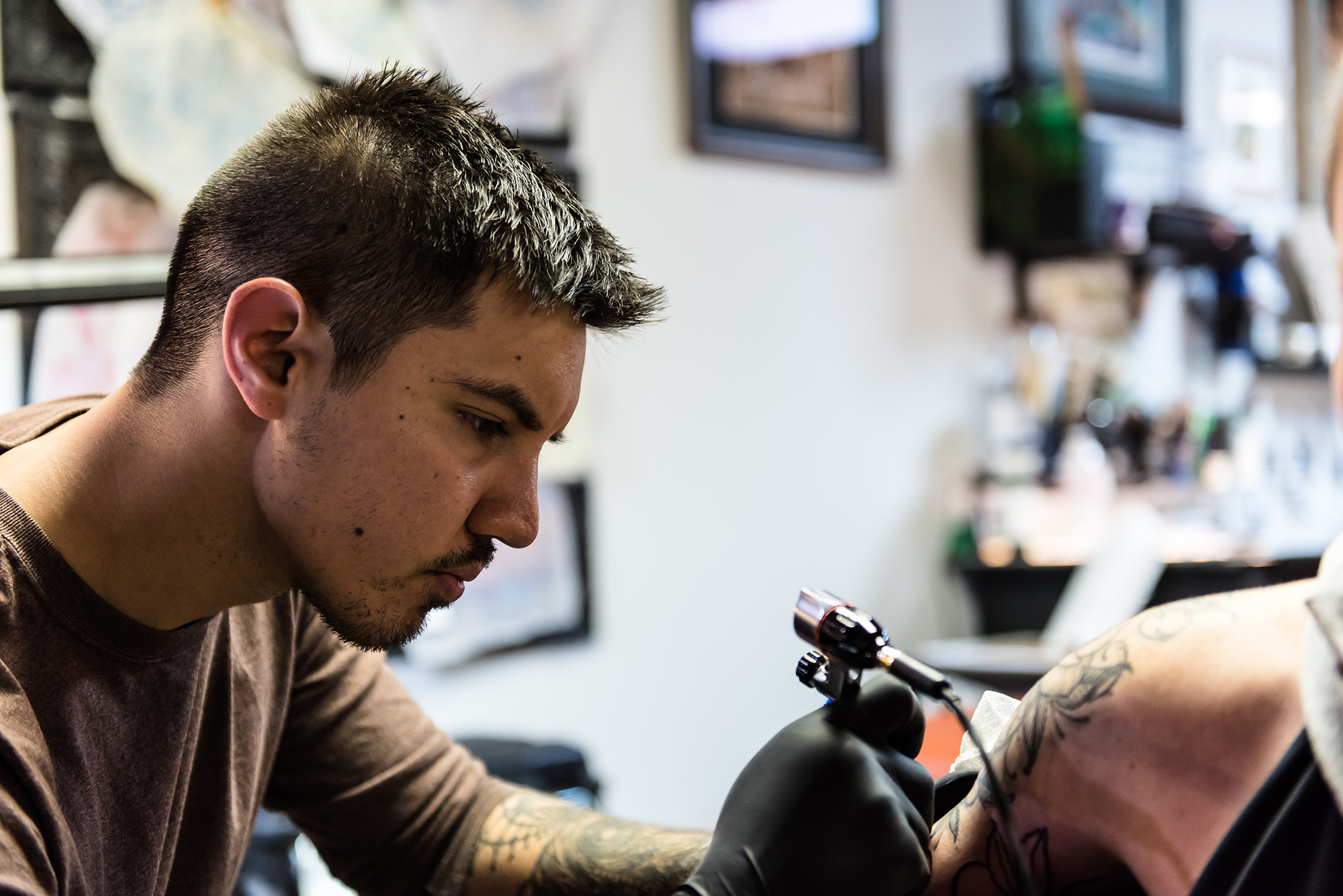 The grungy, smoky, dungeon-like tattoo parlors of past decades are no more. Today, shops like Manhattan’s Syndicate Tattoo and Black Mammoth Tattoo are as warm, welcoming and trendy as a used bookstore or a niche coffee shop, with gleaming hardwood floors and modern artwork lining the walls. They are filled with the sounds of tattoo artists trading stories and humming along to great American classics as they work.

“When I was a kid, we used to go to this little fair,” he said. “They used to put this little trailer out and they had a sandwich board that had tattoo designs, and there were mostly biker guys who would come and get them. I just remember hiding and watching the biker guys go in and out of the tattoo shop.”

Now a U.S. Army veteran with 12 years of tattoo artistry experience under his belt, Goss said he has to wear a lot of different hats. Translating people’s words and visions into beautiful, permanent body art on the first try is no easy task.

Both Goss and Black Mammoth Tattoo owner Cody Bader got their start apprenticing in Aggieville, at Rat-a-Tat and Stray Cat Tattoo, respectively.

Tattoo artist apprenticeship is a form of one-on-one training, where hopefuls shadow a mentor to develop their skills and learn the trade. Bader said that although some tattoo “schools” have popped up here and there, apprenticing is still the most respected route.

“It’s usually pretty difficult and you have to earn your spot and pay your dues,” he said. “You start pretty low on the totem pole, work on your drawing skills and then you slowly learn about the craft of tattooing.” 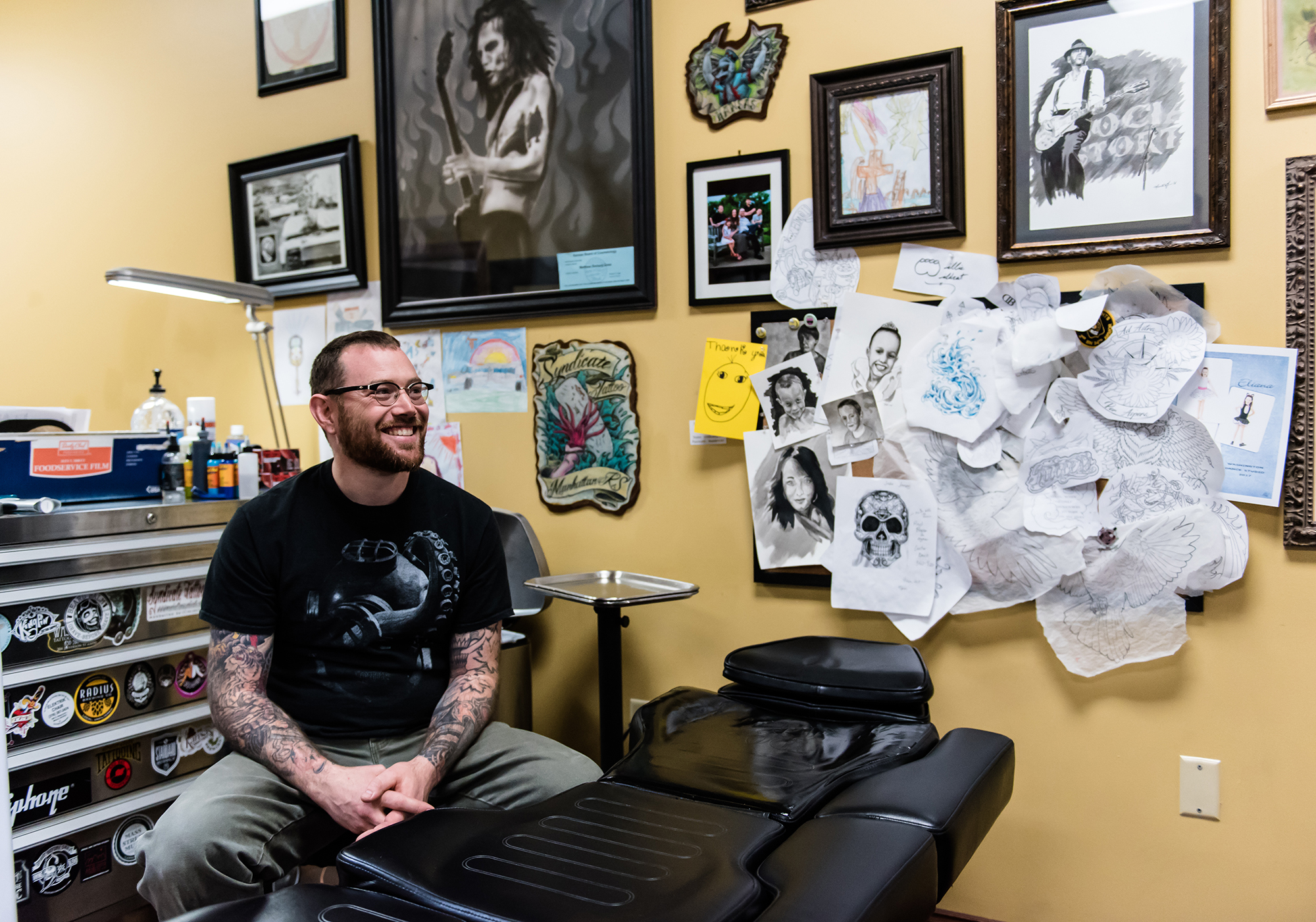 “I LOVE TO GIVE PEOPLE SECOND CHANCES WITH TATTOOS,” Matt Goss

Goss said meeting people and building relationships are some of the best parts of the job, especially with customers who come back for multiple sessions.

“You get to meet and become a part of people’s lives when you spend 15, 20, 40 hours with them in a chair,” Goss said. “You actually get to become friends with some of your clients, which is great. I’ve been tattooing 12 years, and I have a guy who I’ve been tattooing for 12 years, who still comes in probably once or twice a month to get tattooed.”

Goss said most of their business comes from regulars, particularly military employees from Fort Riley, while K-State students come in for piercings more often than tattoos. Bader reported the same trends at Black Mammoth.

“I feel like K-State students are working with a little less disposable income, and if they do have it, it’s usually a quick one-and-done tattoo,” Bader said. “They get a lot of piercings here, that’s definitely most of the piercing business. But for tattoos, coming in once a month and spending several hundred dollars is out of range for most students. They’ll just come in and get the single session tattoos.”

Both store owners also said that a stigma still exists around tattoos, but that they’re becoming more widely acceptable.

“We tattoo professional athletes, doctors, professors, all walks of life and professions,” Bader said. “It’s getting more and more common.”

Goss said even the stigma around piercings has changed completely.

“We have people who are getting certain piercings to help with headaches and things like that,” he said. “We’ve actually had physicians send people in to try a piercing because they haven’t had any luck with medications… That’s a huge turn… For years, the medical industry’s been against us, and I think with the laws and stuff that are in place, they’re a lot more comfortable, knowing that we have some training and we’re trying to keep people safe as well.”

Goss and Bader are well aware of the health risks involved in getting inked. They caution against illegitimate artists and take steps to protect their clients.

“Everyone thinks they’re a tattoo artist now,” Goss said. “You can buy all the stuff online, so people are buying it and doing it on themselves or their friends, and it’s created a lot of chaos in the industry.”

Bader emphasized the importance of professionalism and cleanliness.

“You definitely want to go to a professional place for sure,” he said. “Getting tattooed out of someone’s house or kitchen is never a good idea. Those people are not properly trained or inspected by any kind of board for sanitation or proper procedure.”

One growing trend, stick-and-poke tattoos, has contributed to the chaos, and often comes with gruesome consequences.

“I think there’s a huge risk, whenever you’re exposing people to body fluids, when you don’t have proper sterilization technique,” Goss said. “There’s a very real risk of contamination, and people getting hepatitis, getting tetanus…You can’t just grab a Bic pen and start putting the ink into your body…I’ve seen a lot of really horrible staph injects that people have come in and asked about. We always send them to talk to their primary care physician. There’s really nothing we can do to help you with that.”

Bader also warns his clients not to be too hasty in choosing a tattoo artist.

“You want to see photos of their work,” he said. “Don’t just base it off of a reference from a friend. You need to be able to see it with your own eyes. Don’t base it off of price either, that’s kind of silly. You’re going to save $100, but it’s going to be there for the rest of your life.”

Even when customers are choosing from talented professional artists, Bader speaks to the importance of finding someone who successfully practices the genre of tattoo they like as well.

“[It’s] about the same as music varying from artist to artist,” Bader said. “It’s good to be somewhat well-rounded, but I think the best artists pick a few styles that really speak to them and that they’re drawn to, and that’s how you really excel… You wouldn’t ask a country musician to write a rap song for you. It’s just like that.”

The artist must also be willing to take the job, and Bader has a lot of stories about bizarre tattoos he’s done — think Mike Wazowski holding up a woman’s breast sort of bizarre ­– but he has his limits, too.

Although the Kansas age requirement for getting tattooed is 16, Black Mammoth follows his personal policy of only tattooing people 18 and older.

“Even adults can make poor decisions, but I feel a little bit obligated to not help a child make a poor decision,” Bader said. “I don’t wanna facilitate that. When they’re 18, it’s up to them; I don’t feel too bad about it. I don’t wanna just make a few bucks. It doesn’t sit right with my conscience.”

Bader said he appreciates the freedom he has as an artist to refuse jobs based on moral objections, as well. For example, he won’t tattoo anything racist, or ink someone’s neck or hands if they don’t already have art all over their arms. He even hesitates to tattoo names.

“Names on people, like significant others, I’m apprehensive about that,” he said. “I usually give them some words of advice to say that’s probably a bad idea. But ultimately it’s their decision.”

“I love doing art all day, having a reason to draw and not get a real job,” Cody Bader

Even after they’ve accepted a job and begun tattooing, the artists are focused on their clients’ comfort and safety.

“Sitting in the chair, tattooing, it’s trying to keep someone calm, and then I always love hearing why people are getting their tattoos, or what they’re about,” Goss said. “I talk a lot whenever I’m in the chair with them, and I think that helps calm them down. We do a lot of first-time tattoos; everyone has a first tattoo and I remember being really nervous… so I think it helps them take their mind off of it.”

From The Spring Print Issue: Spill the Beans